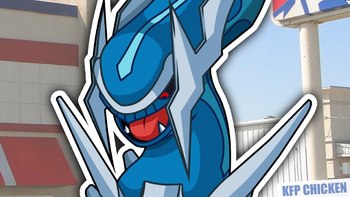 Episode 1's thumbnail.
Dialga and Palkia's Loud Adventures is a series on YouTube created by Megamitch. The episodes focus on two Pokemon, Dialga and Palkia, who are constantly screaming in every episode. So far, there are four episodes, and two joke episodes.

Tropes in this series include.