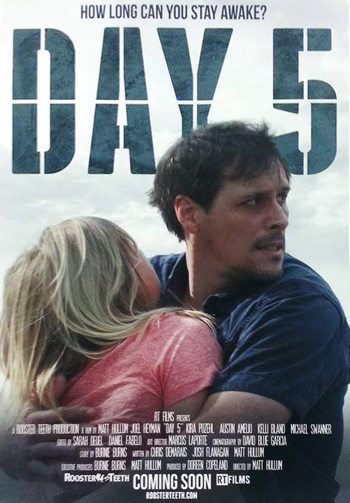 Day 5 is a post-apocalyptic drama web series by Rooster Teeth. It is their first foray into darker, more serious content as opposed to their previous comedy/dramedy works. In addition, it is one of their first shows offered only to sponsors (now called FIRST members).

20 Minutes into the Future, the world is suddenly affected by a strange malady which causes the death of anyone who falls asleep. Five days later, humanity is on the brink of extinction as the remaining survivors binge on cocktails of drugs, sugar and whatever they can find in a desperate attempt to stay awake and stay alive.

Jake (Jesse C. Boyd), is a loser drug addict who comes out of a several-day trip to find that the world has ended. He teams up with a teenage boy named Sam (Walker Satterwhite) in order to stay awake, making an alliance with a pilot named Ellis (Davi Jay) who is searching for answers as to the cause of the "sleep apocalypse". With the help of a radiologist named Ally (Stephanie Drapeau), they embark on a search for a cure before their time runs out.

Notable for its increase in production value and episode length compared to other RT live-action shows (each episode is roughly a full TV-hour long) and for having a long cycle in Development Hell. According to RT's chief creative officer Burnie Burns, it has gone through at least three iterations before the version that was eventually released including a nearly-completed feature length film. A third season was announced to air in 2019, with Rooster Teeth looking into third-party production, but did not happen.

The series made its American television debut on El Rey Network in October 2018.

Compare to Bliss Stage, which is roughly the same premise but with giant robots.