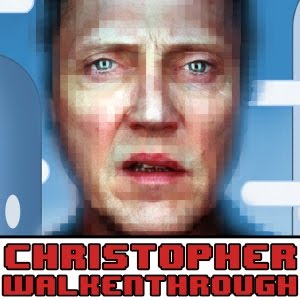 Christopher Walkenthrough is a series that's part Character Blog, part Let's Play, created by Jason Stephens of GameSocietyFilms. Christopher Walken (voiced by Stephens) plays video games, occasionally accompanied by his "good friend" Morgan Freeman (also played by Stephens). The show began on August 23rd, 2012 and has since taken off in popularity, with most episodes getting hundreds of thousands of views on Machinima's YouTube channel. There are currently 40 episodes, including a Christmas special called "The 12 Days of Walkenthrough".

Unlike similar shows with character gimmicks such as McGoiter's Bane Plays...

series, Christopher Walkenthrough is edited like a Clip Show, allowing the humour to remain fresh with the constant change of setting, gameplay, and Stephens' excellent imitation of Walken's Cloud Cuckoolander habits.

You can find a playlist of all Walkenthrough episodes here

So far, Stephens has Walkenthroughed the following games:

I've got a fever, and the only prescription is more trope examples! Ho!