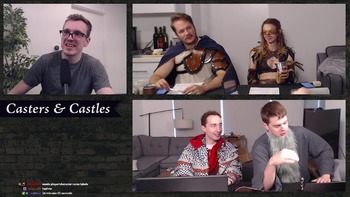 League casters!note And Ashley, from Production! In D&D!note Clockwise from top left: Bren, Uber, Ashley, Reinforce, Sideshow
"On the shores of a secret island, in the middle of a mist-shrouded lake, far from the sight of any other land, stand four heros... unfortunately."
— Bren, Episode 1
Advertisement:

The games are broadcast live on Twitch

The cast is as follows:

Tropes found in Casters & Castles include:

Lysha: I don't want to burn a 2nd level spell slot on this.
Alan: What's a spell slot?
— Episode 3