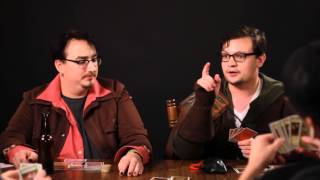 Boardkake is a web comedy show starring Mike Bennett(of The Bunny Perspective fame), Andy Lewis, Josh Lyon and Sam Oswald as caricature versions of themselves playing board games. The concept is very simple, the execution gut-bustingly funny. The games rarely go as planned and go off the rails into house-ruled insanity or devolve into rules lawyering and nitpicking. It doesn't help that all four protagonists play for keeps and are more than willing to screw each other as they play.

The series has scripted episodes, but also vlog Let's Plays of the different games where the cast explains the rules and play in a much friendlier manner. The vlogs still turn out hilarious, though, considering they like to play games like Cards Against Humanity and Munchkin.

The show is released under the Bunny Perspective channel on Blip. You can check it out here.