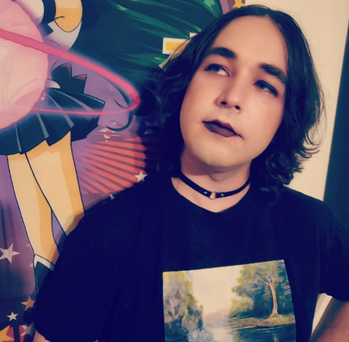 (video has been marked private)
Advertisement:

Beatrice "The Golden Witch" Collins is an internet media critic and content producer, primarily known for the critical, detail-oriented videos on both anime and the anime industry which she produced under the persona of "Digi". As Digi she reinvented herself several times, earlier names for the channel being “Digibrony”, "Digibro" (her most well-known online alias), and “Digi-neé”. Beyond specific reviews detailing the individual merit of specific anime series or genres, her topics of discussion included how anime is produced, how it is distributed, and how it is consumed. She called her idiosyncratic style of analysis "Otaku Gonzo Journalism", and herself "The Human Content Machine".

She first came into prominence as a pioneer in the MLP Analysis community, and for a long time she was chiefly known for her MLP videos. She eventually lost interest in the show and retired as an MLP analyst. After that she chose to channel her passion for media analysis into other mediums, anime being only the most prominent. While she does examine anime she enjoys, she has also received significant attention for critical and largely negative reviews of Sword Art Online and The Asterisk War, with multiple videos dedicated to pointing out her gripes with both series at length.

She's had over ten different channels on YouTube, most of which are inactive. Her main YouTube channel can be found here

and Branches Of Ygg

(formerly Digibro After Dark); originally these were merely places she used to upload other things like podcasts, impressions of movies and videogames she's experienced, and other stuff unrelated to her main focus, but which have been frequently used since then to house her main content. This is because her channel was taken down a number of times as a result of YouTube's flagging and content policies, which prevented her from posting videos with long-form footage of shows. Regardless of what was going on on YouTube, Beatrice would post her reviews in text form on her blog, "My Sword Is Unbelievably Dull

", which was also intended to help people who couldn’t access her videos for whatever reason. Another one of her channels was Digi Bros

, in which she and her younger brother Victor would play games with their girlfriends. She was also a member of a group of YouTubers called The Pro Crastinators

and appeared in their regular podcasts; besides this she was the co-host of fellow Pro Crastinator Best Guy Ever's anime review and reaction show "KHANTEHNT!

" Finally, she is very into music and uses her platform to share her original rap albums and music videos.

, she came out as a Transgender woman, using the name Grey as a placeholder before settling on Beatrice/Trixie. In old videos you might hear her referred to as Conrad.

Beatrice was engaged for a couple of years to another anime YouTuber, May, and they collaborated on videos for the Beatrice channel as well as May's channel, Pantsu Party; they separated in fall of 2020. Beatrice is now in a relationship with Bird.

(video now private) she was retiring the Digi brand in favor of a new media enterprise, Ygg Studio, and as Beatrice the Golden Witch she will no longer answer to the name Digi. She explained that anime analysis would no longer be the main or exclusive focus of her work—although it will certainly be included—and that fans would have three weeks to archive her Digi content before it was made private. In April 2021 she posted a video

explaining the new staff and format for YGG studio, while also acknowledging that she would no longer be part of the Pro Crastinators Podcast or "KHANTEHNT!"

You can find the shows she's watched on MyAnimeList

open/close all folders
Tropes appearing in Beatrice's videos
Tropes Beatrice Discusses in her Videos
Beatrice: Gen Urobuchi had enough hype at the time that people actually did watch this bizarre, CG, ugly-ass, weird fucking thing that he wrote, that is the polar opposite of what I'm saying should have happened.