Nelson: "So you're a cyborg now. You couldn't cut it as a real man, so you decided to make yourself into a tin one. Pathetic. What a waste of good technology."
Killhouse: "We'll see about that..." 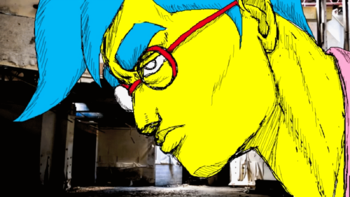 Set in an Alternate Continuity of The Simpsons universe, the film begins with Nelson Muntz and his cronies holding Bart Simpson hostage in a vacant warehouse. Nelson intends to kill Bart, having done the same to his younger sister Lisa sometime earlier, but is interrupted by Milhouse Van Houten. Now calling himself "Killhouse" and having altered his body into that of a Cyborg, Milhouse aims to defeat Nelson's gang, save Bart and avenge Lisa's death.

While intended to be something of a parody of over-the-top dark fan fiction as well as 80's fighting Anime series such as Fist of the North Star, it is noted for possessing high quality artwork and fight scenes that are dynamic enough to call its status as a parody into question.