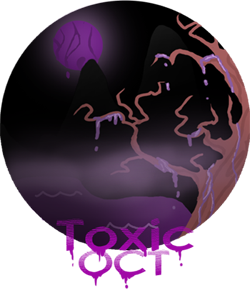 Don't you wish you paid more attention to the environment?

is an Original Character Tournament currently on its final round, a surprisingly three way race for the gold, hosted on DeviantART. The setting is basically a Garden of Evil.

The storyline is quite simple: A wide variety of characters are asked by one of four Guardians to help them to save their world from a creature named Toxen who has taken away their king. The name is a pun of the word "toxin", so his (its?) powers are quite obvious.

Fin - Guardian of Fire, and a former king

Mother - Guardian of Plants and Life

This OCT contains examples of the following tropes: