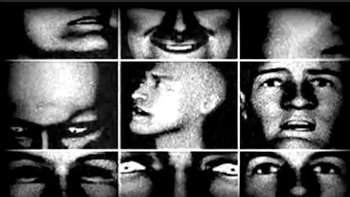 "YOU WILL SEE SUCH PRETTY THINGS"
Advertisement:

The Wyoming Incident is an internet horror ARG and creepypasta that began in 2006. Considered the first horror-based internet ARG as well as possibly the first creepypasta, The Wyoming Incident originated as a tale about a video that purportedly drives viewers to madness. This video is the recording of a supposed signal broadcast interruption of a Wyoming news station that resulted in mass confusion and terror brought upon by the infrasonic frequencies contained within the hijacking.

From there, the ARG primarily revolves around a forum known as "The Happy Cube", where forum-goers come to share their experiences in "cubing". From then on, more and more dark things and revealed, and it turns out that this may be far more complicated than a simple signal hijacking.