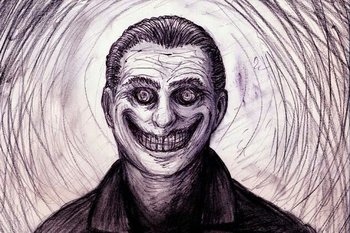 The Smiling Man is a short Creepypasta written by L.S. Riley, originally published by him on Reddit's LetsNotMeet forum in April 2012 under the username blue_tidal.

An unnamed man has trouble sleeping. So as not to disturb his roommate by staying up in their apartment, he takes long walks in the city in the middle of the night. On one walk, he turns onto a side street and encounters a strange man who can't seem to stop smiling.

One of the most famous examples of Creepypasta, it has been imitated, adapted and parodied numerous times. Read it here

. Alternatively, watch a short film based on it here

, an animation based on it here

, or listen to The Nosleep Podcast's adaption here

The Smiling Man provides examples of: