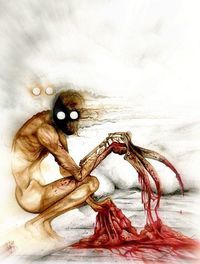 is the subject of a creepypasta regarding a murderous human-esque creature that has appeared numerous times. Not to be confused with the landscaping tool, The Rake's name comes from one particular case of an attack by this thing, in which a dying girl (hurt by the beast) simply called him by this name.

The Rake has a voice that instills terror to go with his appearance. It's entirely possible that there may be more than one, but let's not think about that.

A film based on this creature was released in 2018.