Web Original / The Mark Side 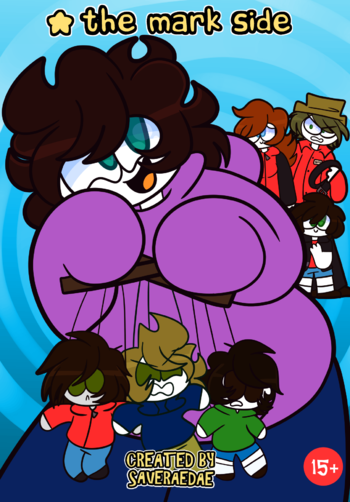 The Mark Side is an animatic series by the Youtube and Tumblr artist Saveraedae. The current series follows the unlucky and somewhat strange life of Mark Reed after the events of when he almost killed his brother. After the events, the three other main characters (friends that Mark had gained prior to the series) left him since they finally decided that they've all had enough of him. Mark eventually manages to drag the others back to him, and the series showcases his life as it seems to get progressively worse. The first episode

is set to be released June 27, 2020. The series itself is presented in animatic format, all of which are created entirely by Saveraedae herself. It does not include background music. The first episode, 'Friend Fiction,' has a slightly more serious tone as it sets the story up, but afterwards, the episodes that follow get a bit more lighthearted.

It has quite the production history, as it was first created in 2016. In 2016, Saveraedae released a video titled "The Mark Side" Episode 1 - "Friends In-Deed!" This video served as episode one to 'generation one' of The Mark Side. While more episodes were planned and a few entered production, the series was soon cancelled due to lack of interest from the creator. It was in a strange limbo stage until late 2019; During that period of time, the story was developed and elaborated on, scripts were written for a new era, and the series' premise changed. The current series is more crude than the previous, and is aimed at more mature audiences.

Updates will be here