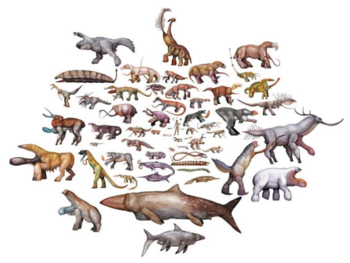 Life on another world.
Advertisement:

Snaiad is a Speculative Biology project by C. M. 'Nemo Ramjet' Kosemen, who also wrote the science-fiction novel All Tomorrows and was one of the contributors to All Yesterdays. The premise is simple: during the 25th Century, the nations of Israel, Greece, and Turkey unite to form a colony on an Earth-like planet orbiting a nearby star. The planet's dominant forms of "animal" life is a group of "vertebrates", all of which have an anatomy distinctly unlike Earth animals. They have two heads, one which houses the sexual and sensory organs and one that serves as a feeding proboscis. Some of the most notable creatures on Snaiad include Kahydrons (pack-hunting predators akin to wolves and hyenas), Fuckers (ambush predators that fill the niche of big cats), Allotaurs (giant, armored herbivores), and Jetocetes (whale-like creatures that use organic jet propulsion to swim). Snaiad currently exists as a website

, and Kosemen has expressed interest in turning it into a physical book in the near future.