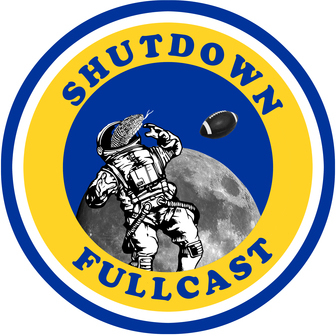 Football, through the Moon Crew.

SBNation, Banner Society, and Channel 6 started covering college sports, and college football especially. The three men and one woman who talk about it on this podcast have been doing so for several years. They are among the most well-versed in university organizations, coaches, programs, and all the weedy little details, dramas and identities of nearly every team and conference.
Advertisement:

Does that mean they have to be insightful, smart, or intelligent about any of it?

And that is the general idea of the Shutdown Fullcast: College football as seen through the acerbic, deeply strange lens of its four hosts, who also are the principal writers and editors at then-Every Day Should Be Saturday, then-Banner Society, and now independently. The Fullcast has two installments throughout the college football season; an hour and a half preview of the week ahead on Wednesdays and which games the hosts are personally interested in, and a shorter show on Sundays reacting to what happened in college football that week, with a special "40 podcasts for 40 bowl games" series right at the end of the season, where the group gives it's general opinion of every game in bowl season...but only as much as they feel they deserve. In late 2018/2019, they also began doing live shows in select places throughout the country, usually the heart of a specific College Football conference, and as such they tend to focus in on the conference as a whole during these shows. The show went on hiatus for four months in 2020, only to return, ensuring that the Fullcast is in fact, unkillable. In 2021, they added a Saturday night rapid reaction show using Twitter's Spaces feature.

What they usually fill it with is plenty of trivia about the often strange, silly, and embarrassing world of college football, anecdotes about their own lives, and plenty of hilarious diversions that may not make it the most informative podcast on college football, but it is certainly one of the most entertaining.

The Fullcast is hosted by:

The Shutdown Fullcast provides examples of: