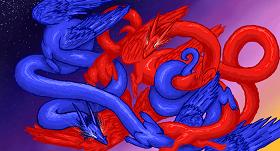 . As its name kindly announces, the premise is that competitors are to race each other] to reach a teleporter to take them to the next phase of the race, all in the world of Aleria.

The point of this is to select one being who'll have the honor to slay the dictator dragons that had once ruled over their civilization (whom had been thought to be dead but turned out not to be) in return for money, fame and keeping the dragons' hides - which are also worth a lot of money in themselves.

Round 1
For the sake of space and consistency, only the winner's canon will be taken into consideration here