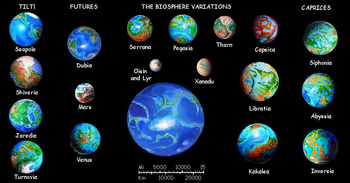 answers all of these questions. It really defies definition, but...

In essence, it's a series of tours of hypothetical worlds, with special focus placed on climate and geography, filled with lush descriptions of alien landscapes, all very lovingly hand-crafted on globes, with numerous drawings of landscapes, flora and features. All of this is created by Chris Wayan, and is regularly updated with new content.

The worlds are grouped in several categories, which include:

Earth, Mars and Venus as they may be 1000 years in the future