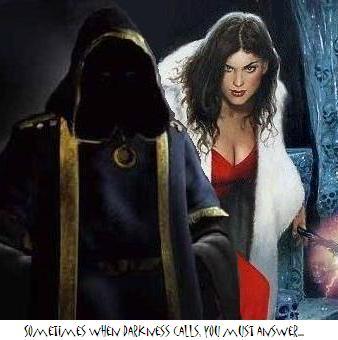 This page covers both the story-game Necromancer and its twin story-game, Death Song.

Necromancer is an online Gamebook created by Choose Your Story user End Master, creator of Eternal. The story-game revolves around a young mage school student with no apparent magical talent. Failing his classes and bored out of his mind, the young man discovers the appeal of necromancy, an art forbidden after the rise of a powerful lich lord, hundreds of years before.

Death Song, also created by Endmaster, takes place in the same world as Necromancer and at much the same time. Death Song, however, focuses on a much more mundane character: a young, aspiring musician who is forced to leave his home and dreams, in order to provide for his family. Taking up arms, The Bard soon comes face to face with armies of Death itself, and, despite his best efforts, The Bard soon learns that you can never beat death.

Examples of tropes in Necromancer and Death Song: