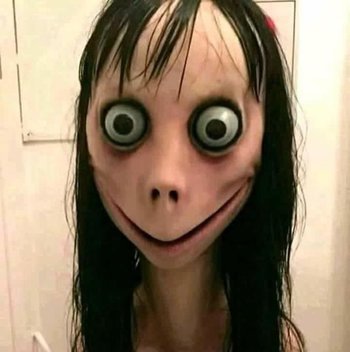 Momo is a July 2018 meme and the name given to a photograph of a woman possessing a large grin, pointed nose, and bulging eyes. The image was first uploaded onto reddit's subreddit /r/creepy. While the image itself is actually of a modern art sculpture and was cropped down as well, an urban legend had arisen about the image, believing it has some connection to the WhatsApp app. Given reports of private information being leaked, there will be no number to get into contact with the "Momo" account.

After a surge of controversy, it was announced that the original sculptor, Keisuke Aiso, had dismantled the sculpture of Momo

(its real name being the Mother Bird), largely because of the controversy as well as it additionally beginning to rot.

Nothing to do with Michael Ende's fantasy book.