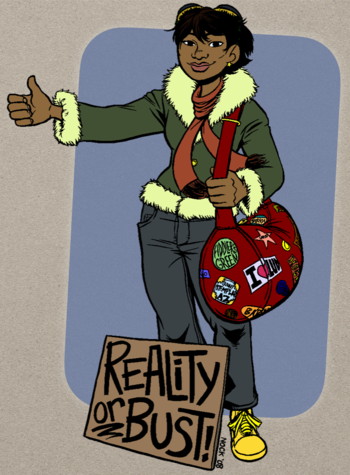 One of the many interpretations of Jenny Everywhere. note (Art by Diana Nock, colours by Aristide Twain.)
"The character of Jenny Everywhere is available for use by anyone, with only one condition. This paragraph must be included in any publication involving Jenny Everywhere, in order that others may use this property as they wish. All rights reversed."
—The license for Jenny Everywhere
Advertisement:

is the world's first open-source fictional character. Although she appears mainly in webcomics, Jenny is freely available for use in other media, and must remain so.

), publication, or Backstory. Jenny has the power to shift between parallel universes, or she exists in every universe, or both. Her appearance varies, but the creator has this as a general description which writers honor to varying degrees:

She has short, dark hair. She usually wears aviation goggles on top of her head and a scarf around her neck. Otherwise, she dresses in comfortable clothes. She is average size and has a good body image. She has loads of confidence and charisma. She appears to be Asian or Native American. She has a ready smile.
Advertisement:

Additionally, her common depiction by writers has her as enthusiastic, kind, generally angst-free, and eager for adventure and toast.

, where she appeared in a bunch of comics. Eventually interest in her died out there, but she's gone on to appear in many, many other webcomics and stories.