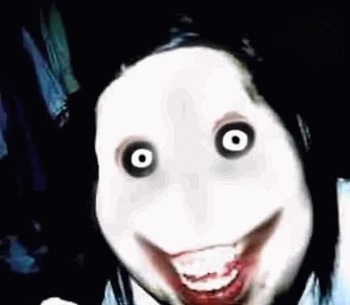 GO TO SLEEP.
"I really like this one. it's like an 80s horror film."
— MrCreepypasta on Jeff's sequel

is a particularly infamous Creepypasta.

The story was formed sort of spontaneously by a user named "Sesseur" on the old Encyclopaedia Dramatica back in 2008, based on speculation about the origin about a particularly unsettling picture on the Creepypasta article called "joy.jpg

◊," A video on YouTube soon surfaced of this picture edited to be deranged and scary in October of 2008.

This is a combination of original research

and memories of former ED editors, whose words must be taken at face value because in 2011 most of the relevant image discussion pages and user profiles for ED were deleted in their entirety when the lead admin attempted to erase the site off the internet; though ED was resurrected, the discussion pages with any information relevant to the case were not recovered. However, like everything else on the Internet, one person's guess is as good as anyone else's.

It eventually become almost synonymous with Creepypasta itself, mostly known thanks to the ridiculous amount of spinoffs, as well as its infamously Narmy and unrealistic origin story, both of which have turned something originally totally off-the-rails frightening into something...well, not so much. Over the years, the other well-written Creepypastas have resulted in this Jeff the Killer becoming increasingly derided and disliked, so much so that it got removed off the Creepypasta Wiki and placed on its sister site, the Trollpasta Wiki, dedicated to non-serious and poorly-written Creepypastas (referred to at one point on the Wiki as crappypastas). A remake was posted in 2015, but was also criticized for the fact that while it managed to fix the broken grammar and plot holes, it still wasn't that great overall.

The origin of the image associated with the Creepypasta may be more interesting than the story itself. For years, multiple rumors flew around the image, including that it was an edited photo of an overweight girl who was bullied by 4Chan and killed herself, or that it was an edited photo of an early camgirl. In 2015, Sesseur claimed in an interview that he made the image himself with a latex mask and some makeup. But shortly after, copies of the image and its alt were found on the Japanese internet dating back to years before Sesseur's first post, as far back as 2005. According to sources on the Japanese internet, including some of the earliest uploaders of the image, the original image was part of a video of a middle-aged woman getting close to the camera, causing her face to appear white, although this image or video has never been found and may well be lost to time, assuming these rumors are even true. YouTuber blameitonjorge has documented the search for this image.

Tropes associated with Jeff the Killer: