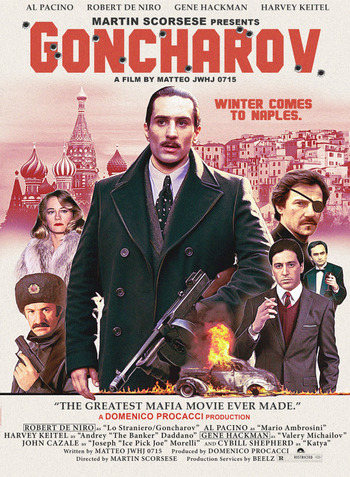 The Greatest Mafia Movie (N)ever Madenote Poster by Beelzeebub on Tumblr
"It is true. I am Goncharov."
Advertisement:

Goncharov is a 1973 film written and possibly directed by Matteo JWHJ0715 (yes, that was his legal name... maybe), produced and directed by Martin Scorsese, and starring Robert De Niro, Gene Hackman, Harvey Keitel and Cybill Shepherd, with John Cazale and Al Pacino. It's been called "the greatest Mafia movie ever made." It follows the story of Goncharov, a former discotheque owner who comes to Naples, and begins to work his bloody way up through the ranks of organized crime. In the process, Goncharov becomes entangled with the lives of Andrey, a familiar face from home, and the Neapolitan mafioso Mario. All the while, his ambitions clash with that of his cunning wife, Katya.

The movie is very loosely based on the obscure 1961 speculative fiction novella Jestem Goncharov by Irma M. Schuss. The novella itself is now out of print. The film was similarly difficult to obtain for many years, due to distribution following its initial limited theatrical run being tied up by conflicting translation rights, the existence of at least seven alternate cuts of the film, rumored interference from the actual mafia, and a very... unorthodox advertising campaign which involved putting the ads not on billboards or movie theater walls, but on the tags for boots.

For over two decades, many even considered it to be the Missing Episode of Scorsese's canon, with Scorsese himself famously quipping that "We'll probably see The Day the Clown Cried before we see Goncharov again." The film was finally released on DVD and VHS in 1998, and has seen several re-releases since, bringing renewed appreciation for this long-forgotten masterpiece.

Except... In reality, and in case you weren't aware, Goncharov doesn't exist, and is in fact an internet meme based on an OCR misreading of the film Gomorrah, resulting in a pair of shoes advertising a non-existent film and a bunch of film fans pretending a film like this exists. This didn't stop the film from trending at #1 on Tumblr only a few days after a fake poster was created in November 2022, with Martin Scorsese trending at #2. On top of this, the film quickly gained a (removed) Letterboxd and (removed) TMDB page, as well as getting its own tag on Archive of Our Own, and having the "main theme" from the film uploaded to both Tumblr and Spotify. The "plot" of the film has so far managed to avoid major contradiction, which may have contributed to the popularity of the meme. The following article is, in tandem, troping the story as it's commonly pretended to be, though given the nature of the film as being entirely made-up, one's mileage may vary if some tropes are applicable or even exist in extreme cases.

I guess these tropes are Goncharov: