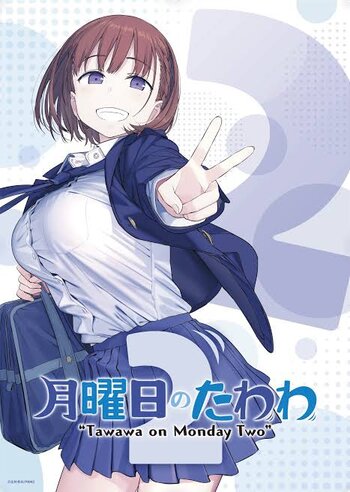 Getsuyoubi no Tawawa (lit. Monday's Tawawa, officially subtitled Tawawa on Monday)note "Tawawa" is the onomatopoeia word for the sound made when low hanging fruit sways. Here, it refers to big, bouncy breasts. is a series of images depicting a day in the life of the various women around Tawawa prefecture, drawn by Kiseki Himura (of Sword Art Online Progressive fame). Originally crafted as a way to alleviate the stress of the working week's start for salarymen by drawing pinups of random beautiful busty women, it has since picked up its own continuity and expanded to a whole series.

While the early installments had little continuity, installments starting from roughly a quarter into the first year began settling on a recurring cast of girls and their love interests, following them through the years as they get through life and develop their romances. Because of the smaller scale, this cast also seemed to worm their way into each other's lives.

The series gets compiled volumes during the Comiket season, each with a bonus manga that expands on one of the girls' stories and explains how they got to their current situations. It also received a five-minute anime that aired on Nico Nico Douga (with a second season arriving in 2021 to Abema), and November 2020 (a good six years after the illustration series started) saw the announcement of a proper manga serialization in Weekly Young Magazine, appropriately releasing every Monday.