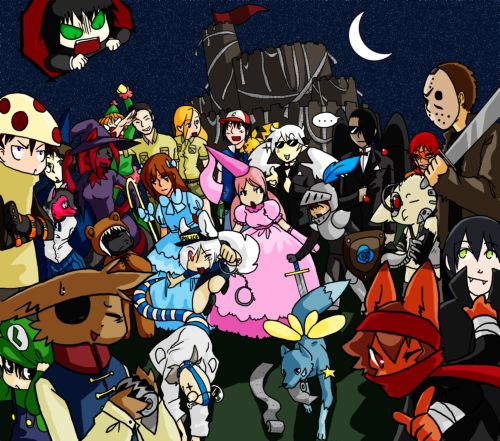 You will NEVER see them this merry. Ever. Not in your life. Not in others'. Not in your children's...you get the point.
"When bloody portals began to open in the sky, and the twisted figures began to stumble out, it was a sign to all that things were about to change. A world consumed by fire, by madness. And its sole hope lies with those who answer the call... An original character tournament different from any other; laden with horror, deception, a role for those who lose their rounds, and at the end, a chance for the winner to gain additional glory... at the risk of destroying everything they have worked for."
— Firewind's Front Page

Firewind is an Original Character Tournament, run on the art website Deviantart

. It is currently at its semifinal round. In it, portals start appearing in the entrants' different worlds, leading them into a barren, deserted landscape. Some of the entrants enter of their own will after seeing a maimed and butchered dying person come out of a portal and listening to the message recorded in a green cylinder he or she was carrying through. But of course, it's all a trap.

Not to be confused with the Greek metal band of the same name.

This page now has a Character Sheet

open/close all folders
Round 1 Summary