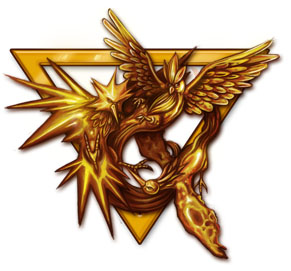 is an Original Character Tournament taking place on deviantART and has been in existence since October 17, 2011.
Advertisement:

The plot takes place around the 1940s and centers around an escalating war between Kanto and Johto. Raging on for years, both sides seem to have come to a stalemate when an unknown force in the form of Mew disables all forms of firearms.

However, with the discovery of 'Living Weapons' in the form of Pokemon

, the war rages on with new men filling the ranks who now find themselves saddled with creatures whose powers are only beginning to be understood, thus begins the shaky relationship between humans and Pokemon at the turning of tide which will decide the fate of these nations.

This tournament is still on-going and is into its fifth round as of writing.

Round 2: The Siege of Undella

Round 3: The Invasion of Ecruteak City

Round 4: Rescues and Rebellions

is currently in the works.

This OCT contains examples of the following tropes: