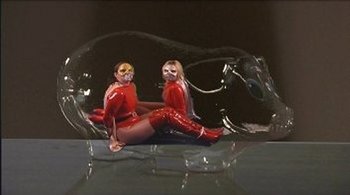 The Adventures of Electrobabe and Dynachick was a series of five superheroine explotation films produced by Dynahunk Production in the late-ninties and early 2000s.

The movies center around the titular Electrobabe and Dynachick, a duo of spandex-clad amateur crimefighters who often get captured by their bizarre and encentric villains gallery and put in slow and sometimes humiliating deathtraps.

The movies are comedic in nature and avoid mature/pornographic content (which was something of an oddity back then), instead focusing on our heroines being chloroformed/outsmarted/overpowered and put in slow deathtraps with lots of Male Gaze Fanservice. According to its creator: Don Courtier, the series is both a satire and a tribute of old superhero shows like Batman and Electrawoman And Dynagirl with the added bonus of Male Gaze, Bound and Gagged scenes and skin-tight leotards. These movies are often credited with the creation of the softcore superheroine peril genre of explotation movies.

After the first two movies, the protagonists were recasted and given spandex leotards due to the increased budget. The fifth and final movie recasted them again with their costumes given an updated design. There was a standalone (cheesy) horror spin-off titled Sucked In where alternative versions of Electrobabe and Dynachick appear.