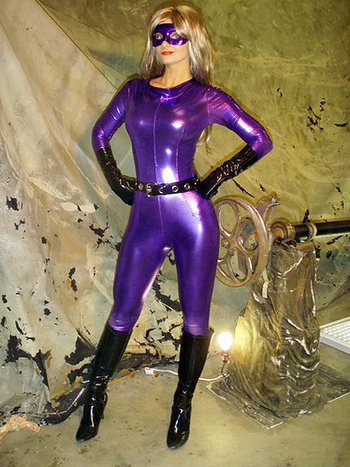 The Daredoll Dilemmas was a direct-to-video series produced by Dynahunk Productions which lasted from 2005 to 2009, and the spiritual sequel to the Electrobabe And Dynachick movie series.

The series is about a group of spandex-clad female vigilantes known as the Daredolls who fight a group of creepy lunatics with googly eyes known as the Peeper Brothers that lurk in the abandoned magic factory where all the episodes takes place.

According to its creator: Don Courtier, the series is both a satire and a tribute of old superhero shows like Batman and Electrawoman And Dynagirl with the added bonus of Male Gaze, Bound and Gagged scenes and skin-tight leotards. The episodes are separated into three chapters referred as A, B and C, each starring a different Doll or Dolls with little to no continuity between episodes. The series had 33 episodes (99 chapters in total).

All the episodes can be bought on Amazon or through a pay-to-watch service on Vimeo.