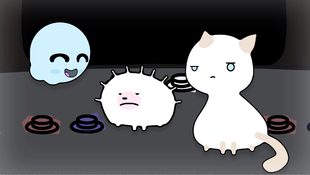 L-R: Naarah, Gideon, Elon
Nothing holds sacred, nothing holds true, everyone tries to make a fool out of you.
— Keynote In response to the question "What is CatGhost?"
Advertisement:

Cat Ghost is a Horror Comedy Web Original multimedia series by Kris Patrick of The Bedfellows fame. Most episodes consist of two parts: a YouTube video and a game that can be downloaded via a link in the description.

The videos generally revolve around a trio of characters. Elon, the titular cat, Naarah the titular ghost, and Gideon, a hedgehog. Elon and Naarah are witches and the series rotates between comedy and more surreal moments concerning the supernatural figures and forces the two have become entangled with. Though Gideon is often taunted and bullied by Elon and Naarah, he still tags along during their exploits.

The games are darker and more horror oriented than the videos, and often hint at the characters' backstory.

Some videos break from the usual format by not coming with a game. Some of these are done in Retraux pixelated video game style and feature characters from the backstory. Another features a Fourth-Wall Mail Slot with the characters answering questions from viewers.

The creators of the series have also collaborated with other Youtubers like Tony Crynight and Night Mind, with content exclusive to their channels.

See also Puzzle Party, another work by Kris under the name Krispy Animation.

The upbeat music cuts out when Elon has to introduce herself.

The upbeat music cuts out when Elon has to introduce herself.