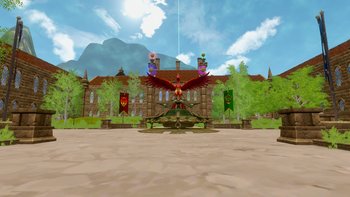 A joining of Machinima and Live-Action Role-Play (LARP), Ascension Academy is an Improv Roleplay series set in a Fantasy World created by Stealth RG. Three times a week, almost every week of the year, thirty to forty individual Roleplayers come together and act out their characters' lives in a Military / Magical Academy known as Ascension Academy. This story is told using VR Chat and is broadcast live on Twitch to thousands of viewers.

The Cadets of Ascension Academy are enrolled in an Officer's Course where they are trained to utilize diplomacy, weaponry, Magic, and strategy to serve the Cross-Allied Forces and save the world! Despite the fact that the rest of the world has forgotten, an ancient entity known as The Darkness has been sealed beneath the school within a Demiplane for 300 years. And it's prison is failing.