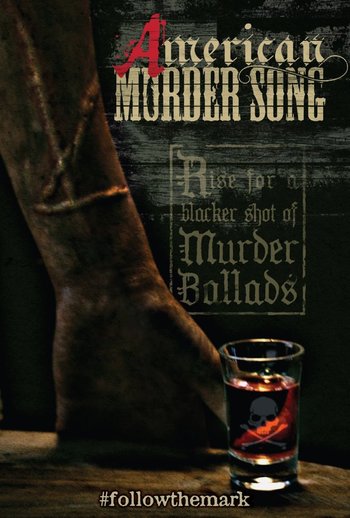 Who will you be at the Six-Mile Inn?
"Follow the Mark."
— Tagline
American Murder Song is a 2016 project created by Terrance Zdunich and Saar Hendelman. The story involves two "Blood Travellers," Mister Storm and Mister Tender, interacting with the spirits of infamous past murderers in 1816 America in a tavern known as the Six-Mile Inn. Eventually, a mysterious snowstorm in the middle of summer confines the Blood Travellers to stay in the Six-Mile Inn, while others make mass migrations west to escape the bitter cold of "The Year Without a Summer." Unbeknownst to them, a vengeful group known as "The Reckoning" are pulling a few strings behind the scenes...