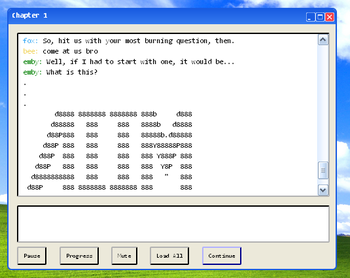 AIIM is a story about robots and group chats and the end of the world.

AIIM is a web-based media piece inspired by 17776. It tells the story of four artificial intelligences as they chat via an old computer program. Bee, Fox, and Onfim have already been active for some time, but mb739, or "Emby," has just awakened. They want to learn more about themselves and the world they live in, but the truth isn't an easy thing to hear, as humanity's time has passed...