Webcomic / The Artist is Dead! 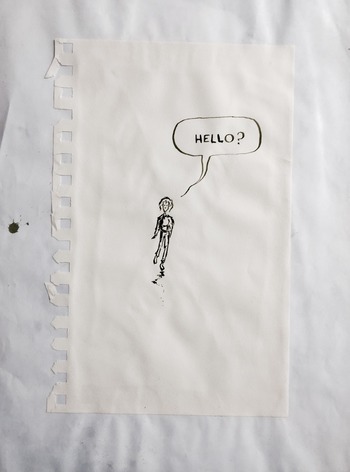 ...where is everybody?
The world beyond the door is a strange one. It is crumpled and surreal and funny-looking and perhaps, at times, perplexing.

But that’s all right. The mystery is part of it. This is a story about creating the correct answer.

The Artist is Dead! is a handmade webcomic by Noah Farlee

. It tells the story of five living drawings — a woman, a witch, a child, an elderly man, and an unfinished figure drawing — that are forced to deal with their own neuroses and a World of Chaos after an Eldritch Abomination murders their own artist.

The comic began in 2011 and was updated regularly on Tuesdays and Fridays until it concluded on April 2013. The comic used to be available on this

site, but it has since moved to the author's tumblr blog

and failed attempts by the comic's author to bring it back resulted in the loss of the entire comic.

The author has, however, made the best out of this situation, as he has decided to remake the comic with high quality photography instead of simply reuploading all the crammily scanned 246 pages. The artwork remains the same, though.

The comic is currently still being uploaded and, as of September 2017, has just finished chapter four.

The Artist is Dead! provides examples of: