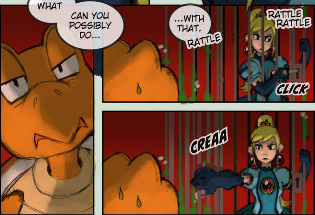 Heroics aside, Samus doesn't look half bad in a dress.
"Should anything happen... I've given you access to break the third law.
Use it wisely, sentry. Remember, we rise or fall together."
— Lord Bowzer

Systems of Entertainmentnote A Nintentdo Doujinshi is a Nintendo-themed Webcomic hosted on DeviantArt and created by Heartgear, who is also the creator of Material Girl.

While sneaking through a laboratory full of Metroids, Samus Aran is ambushed by a Magikoopa, and her suit is turned into a blue princess dress. The ambush also transports her to a castle, where a horde of Koopas bind and gag her, and she is locked in a cage dangling over a pool of lava. The ruler of this castle, Lord Bowzer, assigns a single sentry Koopa to keep her company, but being the character that she is she escapes with ease... only to accidentally fall into the lava and go right back where she started from.

When Bowzer disappears, and enemies in the castle stop talking, the sentry Koopa decides circumstances have gotten too strange and takes Samus somewhere else. All the while, questions begin to rise: where did Bowzer go? Where is Princess Peach during all of this? What would happen if Samus were to successfully escape?...

The comic began in a traditional art style, and moved to sprite-based flash animation in the middle of the first chapter. While the comic officially started in April 2012, a November 2010 comic called Mushroom Kingdom Bounty - Princess Aran (first designed as a commission for a deactivated user

) was retroactively made the first installment. It is currently on hiatus with no ETA on its return yet.

In the meantime, the creator has also

(all of which may hint at a video game adaptation

). You can start reading it here