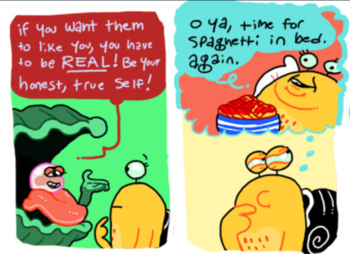 Snail Diaries is a Journal Comic by Grace Gogarty, AKA Little-Tunny. It focuses mainly on her true Slice of Life stories she finds comedic, exaggerated by her personification of everyone as a Funny Animal based on personality.

The main character of the comic is Grace herself, personified as a snail.

(posted alongside other works).