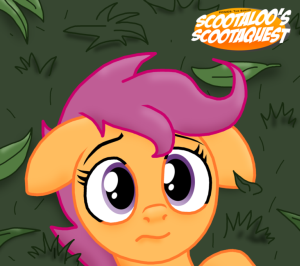 ; it is part of the studio's "Ponies: The Series" brand. The first official episode was released September 1st, 2012 after the two pilot episodes "20% Cooler In Everything" and "Berry Discrimination" were well received by audiences.

Scootaloo's Scootaquest begins when she visits Rainbow Dash, only to find she's sick with what appears to be a cold. Wanting to impress her idol, Scootaloo promises to find a cure. However, this is no normal cold, this is the the work of dark magic. The virus is spreading fast, infecting nearly everypony in Ponyville. Twilight desperately works on a cure while Scootaloo tasks herself with rounding everypony up and taking them to Lake Altai to wait for the cure. Tensions are running high as some ponies don't take well to being confined, and as Scootaloo unravels the cause behind the mysterious virus.