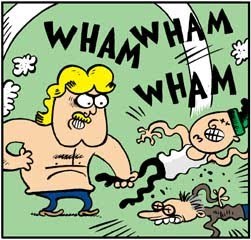 "Don't forget that Rock needs to have sex every 24 hours or his head explodes! It's the price he has to pay for his amazing powers!"

Rock Manlyfist is a parodic martial arts comic written and drawn by Johan Wanloo. It's an Affectionate Parody of all the 80's action tropes you can think of, much like an other piece of Swedish Media, only Rock Manlyfist did it first. The eponymous character is a badass from the 80's who is awakened from his suspended animation by the US Government in order to combat North Koreans, Shaolin Satanists, Swedish Neo-Viking Terrorists, Laser Beavers, and more Ninjas than you can throw a Shuriken at. How does he accomplish this? Well, Rock Manlyfist is a master of "Space Karate". An immensely powerful fighting style wich allows him to do literally anything as long as he screams "SPACE KARATEEEE!" at the top of his lungs while doing it. The catch? Well, Rock needs to have sex every 24 hours, or else his head will explode. Bummer.

Originating as an English language Web Comic (since taken down) back in 2010, new adventures with Rock Manlyfist can be read in the Herman Hedning magazine every month (if you're Swedish that is.) The Web Comic can still be read using wayback machine.