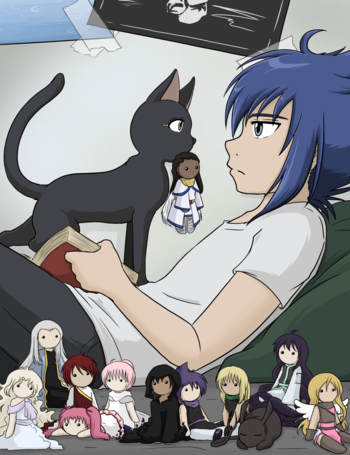 Andrew, Bast, and and the rest of the cast as dolls.
"Death is final and cannot be changed, not even by gods."
— No Future's summary
Advertisement:

The God of Death accidentally took the life of Andrew Perkasin before it was his time to go. In an attempt to make up for it, Death asks Era and Aeon, two lesser time gods, to reverse time and warn Andrew of his fate. Andrew is thus given a second chance at living a life as fulfilling as possible before his untimely encounter with death.

Andrew must now try to meet his life goals before he dies at thirty-seven, while balancing school, family, his social life, a relationship and living alongside gods.

No Future is an Animesque Webcomic drawn by Kura L. Seunnapha, who is also the author of Raven Wolf.

on Tapas. Kura's Patreon is here.