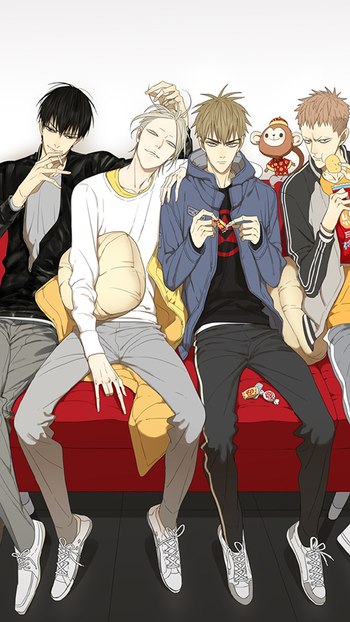 The main characters from the left to the right: He Tian, Jian Yi, Zhan Zheng Xi and Mo Guan Shan
Advertisement:

19 Days is a comedic manhua (Chinese webcomic) created and drawn by Old Xian.

It is the story of two middle school boys, Jian Yi and Zhan Zheng Xi, and their daily lives together. But on their second day of high school, Jian Yi disappeared without a trace, only to come back to Zheng Xi's apartment three years later. Zheng Xi is in college, while Jian Yi is back in high school.

Around chapter 76 the story featuring the flirty He tian and reluctant Mo Guan Shan began.

It started around November 2014 and is still ongoing. It can be read here.

It is the Spear Counterpart to Their Story.

It should be noted that the first 14 chapters take place after Jian Yi's return. Everything after that is a flashback while the two are in middle school.