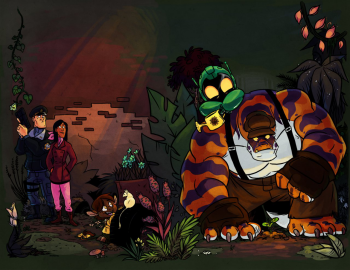 is an ongoing webcomic.

The Zid'ral known as 'Kilo Monster' is a professional fighting champion, with only three defeats in his career. Forced to fend for himself as a child in the city, and due to a genetic mutation that grants him extreme strength and a resistance to the arcane, Kilo is a force to be reckoned with in or out of the ring. As a champion, Kilo has everything he needs: his garden, which he cares for every day, a home, and peace of mind.

His life is turned around, however, when he happens to meet three particular people: NIKA, a sentient A.T.L.A.S, or Arcane Technology Lifeform Automated System, who has been separated from her two friends and fellow protagonists: Jaymi Andrews (an Engineering major who aims to continue her father's, Dr. Joseph Andrews's, research) and her brother, Lt. Todd Andrews, a huge fan of Kilo's.

Tropes Associated with the web comic: