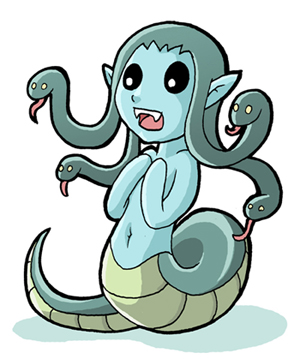 Modest Medusa is a webcomic written by Jake Richmond and featured on The Duck, although it got its own website

On the night before Christmas, Jake comes home and finds that the toilet has overflowed and flooded his bedroom. While moving his stuff to a different room, he finds a gorgon child hiding in the closet. Because she cannot return to the land she came from, Jake and his niece Marah have to take care of her.

It spawned a Kickstarter funded

RPG, The Magical Land Of Yeld about children who pass through a mysterious door and find themselves trapped in the world of Yeld. A series of miniatures were also funded through a campaign

Tropes featured in this webcomic: