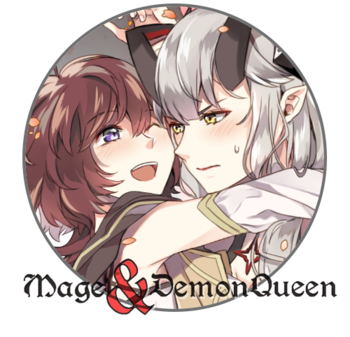 Mage & Demon Queen is a Webcomic by Color_LES.

In a fantasy world that is not an MMORPG, but operates by a lot of the same rules, teams of human adventurers seek to challenge the Demon Tower. Whoever can ascend to the top floor and defeat the Demon Queen Velverosa will gain fame and fortune and a rich reward from the kingdom.

But the queen is very powerful, and no party has ever survived a clash with her. One particular thorn in her side is Malori Crowett, a particularly powerful young mage that has repeatedly reached the top, only to have her party eradicated (fortunately, Death Is a Slap on the Wrist here.) But that's not holding back Malori, who is more determined than ever.

Not to kill her, oh no. To win her hand (and the rest of her body.)

And so a silly yuri Romantic Comedy begins.

Vel: ...and get your hand off my chest, you opportunistic pup.