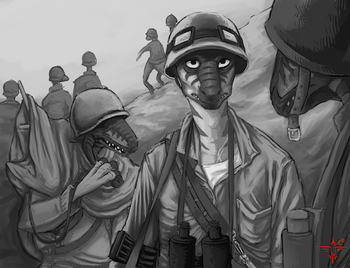 Krig RAWR is a Swedish Webcomic written by Tomb Svalborg and drawn by Mirjam Löfgren. It's an epic war drama about the conflicts between the Herbivore and Carnivore Dinosaurs of Pangea. Anachronism Stew is in full effect as these Dinosaurs blast the crap out of each other with Assault Rifles and other modern weaponry. Think of it as a Darker and Edgier version of Dino-Riders... without the riders. In addition to it's publication on the web, Krig RAWR has also been released in Fan Zine form and published in the Anthology Magazine "Utopi". As of 2014 Krig RAWR is on a hiatus as Mirjam is busy with college. Read it here.