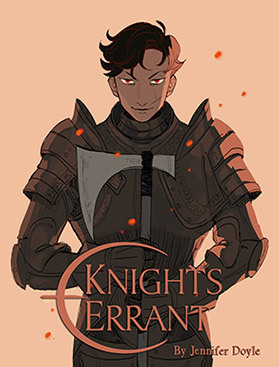 Knights-Errant is a fantasy webcomic that, in the author's words, "details the lengths to which Wilfrid, a once exalted member of society, will go to reclaim favor with the courts". Namely, joining the "Errant Knights", a mercenary band known for actually having a code of honor. They are led by the young (and handsome) knight Oswald.

So far it's been mostly comedic and a little slashy. Then Chapter Three comes along and catches everyone off-guard.

Was originally posted on Smack Jeeves but that version is no longer available. However, the author has published a reboot called "Knights Errant: Pavane" that is currently being posted on the Sparkler Monthly site.

The characters are the same, the major difference being the sequence of events.

For the trope, see Knight Errant.