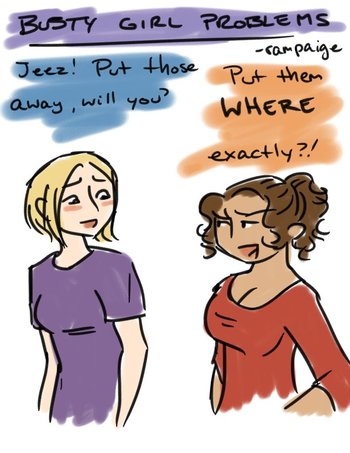 Tumblr Gag-A-Day Single Panel Webcomic by Paige Halsey Warren about being stacked, busty, well-endowed in the upper torso, heavy-bosomed, you get the idea. No continuity, no named characters, no story beyond wry observations about the perks and pitfalls of living with large breasts. Or really, breasts of any size that they become an occasional encumberence. Really, let's not split hairs.

Simple situations on the extreme realism end of the scale, sketchy art, with many typical Female Anatomy Tropes humorously explored and deconstructed. Read it here.