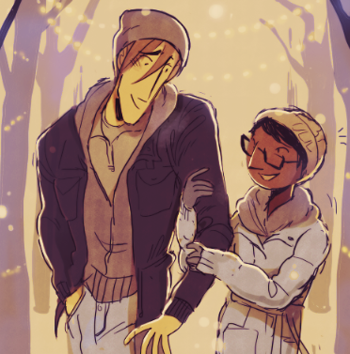 "I certainly wouldn’t mind getting away from here..."
"Go Knights!!"
— The school's War Cry for their team

Essentially a gay Will They or Won't They? set in a fancy private High School. Vincent Fawkes is a hot and popular quarterback (but a poor Scholarship Student), Teddy Bijapur is his nerd-chic billionaire best friend. Their nosy classmates insist there's more than friendship between them, and they may just be onto something... or not. It is written by Mickey Quinn, and can be found right here

In mid-2016, the comic was discontinued by the author, she would keep the site on, but had no further interest in continuing to work on it.