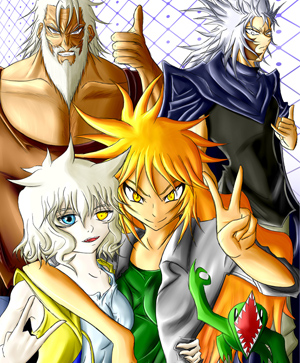 ("The Fight Against the Manginsians" [Yeah it's a typo]) is a Brazillian Web Comic. It was one of many comics that the author used to make as a child, one day he found this comic that only had half of a page made, then she decided to continue it abusing the shonen genre in a World of Ham where even a single move is made over the top.It start off with a prologue with two mortal enemies, Cara (Dude) and Fentisseiro (Mangisian[Magician, in case you couldn't tell]) are facing each other, Fentisseiro seems to have the advantage thanks to an Artifact of Doom, but Cara manages to win the fight because he knows that the true power lies within the heart.Then the story cuts to a timeskip of 50 years and we're introduced to two new characters, Guria (Gal/Broad) and Mulher (Woman) and then the story follow short arcs: