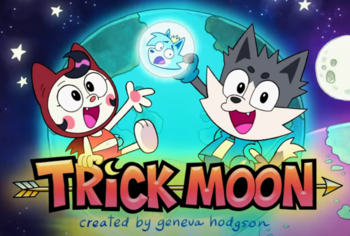 Pocket and Trickshot, with Prince in the Magic Moonstone.
The Prince was stuck in the Moonstone he swore to defend!
With none of his powers, he's gotta depend on... (Trickshot and Pocket!)
His brother and sister! (Are bad at their jobs!)
They just wanna play all day and live like kings,
'cause Trick and Pocket pull the strings on...
Trick Moon! (Trick Moon! Trick Moon!)
— The short's Expository Theme Tune

Trick Moon is an animated short pilot created for Cartoon Network by Geneva Hodgson, a former writer and director for OK K.O.! Let's Be Heroes. It was released on YouTube on July 21, 2020.

Prince and his loyal crew are defenders of the land and protectors of the Magic Moonstone... until one of them betrays them. Now trapped in the Moonstone, Prince must rely on his younger siblings Trickshot and Pocket to lead the group and protect the Moonstone (and himself), which, due to being two young kids, they'd much rather goof off and have fun instead.

The short can be found here

that the pitch was rejected due to restructuring at Cartoon Network under its new AT&T administration.

The theme song for the online short ''Trick Moon'' explains it's basic premise -- good thing, too, since the short itself dives right into the action!

The theme song for the online short ''Trick Moon'' explains it's basic premise -- good thing, too, since the short itself dives right into the action!