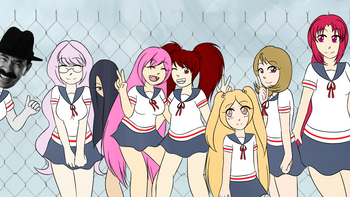 Yes, that is the Scatman.

Tokyo Fetish Mew is a fanime created by Missy R.

which was made to be a Spin-Off of Tokyo Mew Mew.

The story is based on the character of Akane Shibari who joins forces with a bunch of other girls with various kinks in an attempt to fight off monsters created by puritans who want to enforce vanilla as the way to go. No one really wants to support this team and their ideals, so they're basically on their own.

There are ten episodes made and released, and they can be found here

This fanime contains examples of: