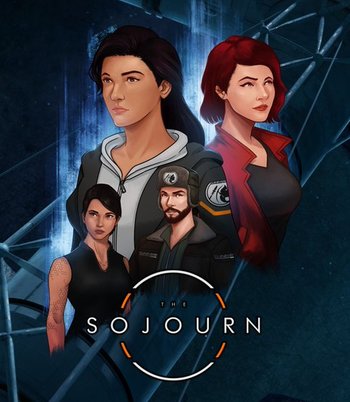 "I stand atop a ship named persistence, beneath sails made of resolve."
— Ship's Motto, Independent Corvette Guinevere
Advertisement:

. The project was funded by a successful Kickstarter

and will feature 12 episodes for its first season. The series' first three episodes comprising Volume 1. released on August 1st, 2020. Additionally, there are plenty of lore videos here

Outside A Galaxy Far Far Away, there exists a race of Human Aliens whose civilization has developed within a tiny collection of star systems called the Tantalus Cluster. The Tantalus Cluster lies in the intergalactic void, four thousand light-years from the perimeter of its parent galaxy, and after centuries of reckless colonisation and a violent interstellar war, the delicate ecosystem of Tantalus has begun to collapse, and humanity is gripped by poverty and famine.

Desperate and facing extinction, humanity’s only hope is a strange nebula that has suddenly appeared beyond the edge of the cluster. Its shifting clouds may hide a source of salvation for the people of Tantalus, but time is running out.

The Sojourn follows the men and women of the Avalon Expedition, a daring mission launched across the void to find the vital resources and territory needed to save humanity. The story delves into the complex motivations and drives of those who volunteered for this dangerous voyage, and explore the many wonders and secrets they’ll uncover on their way.

member Larissa Thompson as Guinevere's captain and co-pilot, Cassandra Farren. In addition, there's Ben Pendergast as pilot and gunner Matthias Croft and Laura Faye Smith as doctor Tamara "Meds" Melari. Emily Serdhal stars as Elizabeth Ancelet, director of the Edric's Gate project and the Avalon Expedition, and the main voice cast is rounded out by Stephen Trafford as Castian Vadric.

The Launch trailer can be viewed here