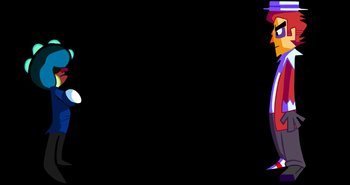 Supermental is an animated web series created by Connor Lavery. It is a prequel to Khonjin House and it focuses on the lives of Pent and Smack, two characters that were briefly shown in Khonjin House. Although the series does shed light on the parts of the lore that Khonjin House didn't explain, the series' main purpose is worldbuilding.