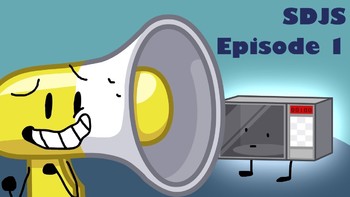 The thumbnail for the... uh, object show?
Super Dumb Joke Show is a joke object show started by Epicbattler3, the one behind Yet Another Gameshow and released on 1st April 2019.
Advertisement:

SDJS is, like any other object show, competition-based which includes the standard package of teams, challenges, elimination and general object show humor. Since the show was created as an April Fool's Joke, there are no planned episodes that the Object Show Community knows of.

Unfortunately, Epicbattler3 deleted the one episode from her channel and with no reuploads, Super Dumb Joke Show cannot be viewed anymore.